The exhibition will be open to public every day from 22nd January until 1st February 2015 from 10 am to 6 pm. It takes place on the occasion of the opening of the small exhibition hall in the newly reconstructed Mánes Gallery, precisely 80 years after the first exhibition of the Surrealist Group of Czechoslovakia.
Famous paintings by Toyen and Jindřich Štyrský, such as „The Magnetic Woman“, „Human Cuttlefish“, or „Liquid Doll“, all from the collection of Géraldine Galateau from Paris, will be presented within this unique exhibition. In light of the extremely high value of the paintings (150 million crowns), the admission capacity will be limited.
The first exhibition of the Surrealist Group of Czechoslovakia was organized by the Mánes Union of Fine Arts and lasted from 15th January to 3rd February 1935 (extended until 17th February 1935). The presented artists were Jindřich Štyrský, Toyen and Vincenc Makovský. Karel Teige and Vítězslav Nezval compiled the catalogue, and Nezval invented surrealist interpretations of the paintings.
As Vítězslav Nezval wrote in his letter about the exhibition to André Breton on 3rd February 1935, “Our exhibition has been extended despite all the small-minded critique. Just yesterday I gave a tour of the exhibition to around 150 young people who asked for my commentary and not long ago there were almost just as many visitors with great interest”.
The exhibition provoked outrage as well among the functionalist architects Josef Havlíček and Karel Honzík, who wanted to resign their memberships in Mánes in protest against the “art that refused order and discipline”. They were also insulted by Nezval's exclamation in the surrealist manifesto: “Enough of an architecture for the needs of buttocks!” 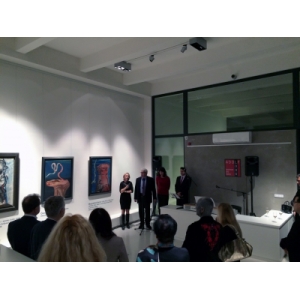