The Exhibition of František Kupka´s paintings

On the occasion of the Frantisek Kupka´s Catalogue Raisonné of Oil Paintings and the 70th Anniversary of his First Retrospective Exhibition in Manes, Adolf Loos Apartment and Gallery organized an exhibition of works by František Kupka.

František Kupka's Catalogue Raisonné of Oil Paintings is based on its international significance in a trilingual version in French, English and Czech and includes 359 original oil paintings of Kupka. The inventory was produced in collaboration with the National Gallery in Prague and the Austrian National Gallery Belvedere and was approved by the copyright holder of František Kupka, the French company Adagp. Its international distribution was taken over by world-renowned publisher König Books London. This is the first complete inventory of the work of this prominent artist of Czech origin.

The exhibition presented oil paintings and paper work, most of which came from foreign private collections and have not been publicly seen since 1946, when the mentioned retrospective of František Kupka was held in Mánes, Prague. Some of the exhibited paintings came from the most famous pre-war collection of František Kupka, which was owned by the artist, patron of art and Kupka's closest friend, Jindřich Waldes. Works from the famous collection of Parisian galerist Louise Carré was also presented. Carré was the only representative of František Kupka (from 1951 to 1957). There were also two bronze sculptures at the exhibition. Original bust Eugenie (Niny) Kupka is the only known statue created directly by František Kupka. The bust of František Kupka, which was donated by Adolf Loos Apartment and Gallery and the Waldes family for the František Kupka monument at Puteaux and Opočno, was presented to the public for the first time. Its author is sculptor Jan B. K. Vlach, and the author's share of Kupka himself is likely.

The value of the exhibited works is altogether more than half a billion crowns and therefore the exhibition will be accompanied by strict security measures.

The exhibition took place in the Adolf Loos Apartment and Gallery Exhibition Hall in Manes in Prague from May 27 to June 1, 2016. 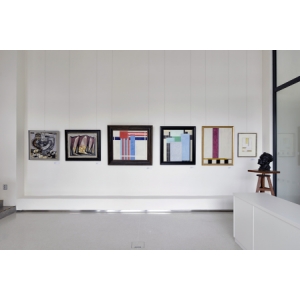