Adolf Adolf Loos Apartment and Gallery is opening a new exhibition space in the iconic EXPO 58 pavilion later in 2021. Our new gallery will be located in Letenske Sady, overlooking Prague’s Old and New Town and the Vltava river. A terrace offering breathtaking views of Prague is a part of the building, built above a unique Renaissance wine cellar from mid- 16th century.

Here, Adolf Loos Apartment and Gallery will introduce a modern gallery and exhibition space for both high-quality Czech and international art. The Expo 58 building is considered one of the most beautiful works of the 20th-century architecture and has become a symbol of the international success of Czechoslovak art and architecture. Once a winner of  the main Golden Star and thirteen other awards at the World Expo in Brussels, this  building has also  been included in UNESCO’s World Heritage List. After more then thirty years will now be made accessible to public again.

Adolf Loos Apartment and Gallery resided at the Manes exhibition hall until 30th April 2021, where it presented a number of critically acclaimed exhibitions of both Czech and international artists between 2015-2021. This is also where we staged a number of highly successful auctions, breaking several auction records for both Czech and international artists.

The building was built in 1958 as part of the Czechoslovak pavilion at World’s Expo 58 in Brussels.  Also known as the 1958 Brussels World’s Fair, Expo 58 was held from 17 April to 19 October 1958 and included over 106 pavilions representing over 42 different nations. During this time, the fair attracted over 42 million visitors and became incredibly important to Czech architecture. The Czechoslovak pavilion itself had become a unique synthesis of Czechoslovak arts and design. Through its participation, Czechoslovakia introduced its advanced cultural and technical maturity to the rest of the world.

The pavilion design competition was held two years earlier, in the summer of 1956. Architects Frantisek Cubr, Josef Hruby, and Zdenek Pokorny were all shortlisted and won. Their project stood out from the competition for its perfect purity of form and groundbreaking technological and construction solutions. Dividing the building into concrete and glass parts, the architects achieved the pavilion’s natural connection with the surrounding exterior. The entrance piazza was an organic part of the entire spatial composition and allowed for blurring of the borders between the interior and exterior of the semi-circular building.

The pavilion’s exhibition programme was developed by Jindrich Santar, who collaborated with a number of artists, including Jiri Trnka, Antonin Kybal, Stanislav Libensky, and Jan Kotik. Their works revolved around the central idea of ‘human being’, while Adolf Hoffmeister’s motto ‘one day in Czechoslovakia’ underpinned the various themes the exhibition tackled. These included ‘Work-Culture-Rest’, split into twelve individual sub-exhibitions featuring a number of monumental works of art crafted from a variety of materials, including bronze, mosaic, marble, glass, and ceramics. Other features of the pavilion that attracted much attention included the restaurant, Laterna magika, Karel Zeman’s sci-fi film Invention for Destruction, and the exhibition's concept as such.

The Czechoslovak pavilion became a sensation during Expo 58. The world recognised its inventive architecture, progressive construction, and rich exhibition programme. The pavilion was awarded the main Golden Star award, as well as thirteen other awards.  Over the course of the six months of the fair’s duration, the pavilion attracted more than 6 million visitors, including the Belgian king Baudouin I, Juliana, the Queen of Netherlands, or Rainier III, Prince of Monaco. One of the most enthusiastic compliments to the pavilion was paid by the film-maker Walt Disney, who left a complimentary note in the visitors’ book.

The Czechoslovak pavilion was awarded the highest score and won the Golden Star and other  awards due to architects’ masterful use of new technologies combining glass with and concrete  and the beautiful modern interiors full of original furniture, and works of art and design, which all anticipated the so-called ‘Brussels style’. This style is characterised by its asymmetrical shapes and intense colours. It combines the aesthetic of abstract art and late functionalism, known for its hanging walls , combination of glass, metal, and other hard materials. The Brussels style was brought into the architectural vocabulary of the streets of cities across Czechoslovakia and became the symbol of the new modern city, soon becoming a part of the everyday. Its influence is perceptible to the present day.

The history of the pavilion after 1958

After Expo 1958, the pavilion was dismantled and transported to Prague, where it was re-assembled in Letenske Sady. This beautiful site with a terrace offering the visitors a unique view of the city from above soon became a popular and sought-after destination. In 1964, Expo 58 was declared a cultural heritage. The second part of the World Expo’s exhibition was reconstructed at Prague’s Vystaviste, where it remained until a fire irrevocably destroyed it in the early 1990s.

Despite its cultural heritage status and subsequent inclusion in UNESCO’s World Heritage List in 1992, the pavilion started to deteriorate in the 1990s while in the care of the state. The building was subsequently sold into private hands and has changed ownership several times since. Once an important symbol of innovation and a cultural centre, the pavilion was forgotten and left to fall to ruin.

In 1997, an Austrian investor took over the space and launched an intense reconstruction, which continued until 2001. The investor and tenants agreed that the exterior should not be changed, and as much of the original interior as possible should be preserved. Between 2001 and 2020, a media agency resided in the pavilion’s spaces.

At the end of 2021, Adolf Loos Apartment and Gallery opened its new exclusive exhibition hall Expo 58 Art in the Brussels Pavilion after a costly overhaul. Adolf Loos Apartment and Gallery presents a modern gallery environment at Expo 58 Art, showcasing Czech and international art. The iconic building is thus open to the public as a centre for prestigious exhibitions and trade in high quality art and design.

We look forward to seeing you soon! 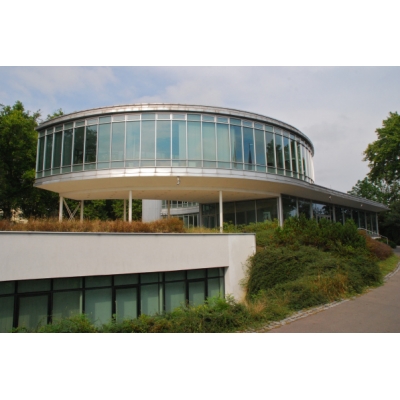