Adolf Loos Apartment and Gallery auctioned another popular auction on Sunday, February 4, 2018. It has offered a great deal of quality artwork, through works on paper, sculptures to oil paintings.
Participation in the Sunday auction was huge, the large exhibition hall in Manes burst at the seams. There were many bidders in the auction, whether personally in the hall, on the phone or through a written limit. Many works were auctioned by their new owners across the borders of the Czech Republic.

The total success of the Sunday auctions in Manes exceeded 90 %. This was one of the most successful auctions in the Czech Republic.

Among the most valuable works of the auction was the oil painting Storm at Fécamp (1953, oil on canvas, 65 x 81 cm) by Josef Šíma. Significant post-war oil was auctioned for 3,900,000 CZK incl. buyer's premium. Šíma's painting was characterized by an extraordinary spiritual depth and exceptional painting quality. The painting came from the Swiss collection of an important collector, Marie Čakrtová, who supported the painter and bought the painting directly from the artist.

Post-war TOYEN for several million
The most remarkable works of art was undoubtedly the exceptional picture of Lavandiéres de nuit from 1953 (oil on canvas, diameter 40 cm) by Marie Čermínová - TOYEN. After a short while the price of the painting climbed to 5.500.000 CZK incl. buyer's premium. The auction of this oil has beautifully finished one of the most successful auctions of all time in the Czech republic.

Adolf Loos Apartment and Gallery also organized another charity auction. The full proceeds of the auction will be donated in support of the Filip Venclík Foundation, the Hagibor Social Care Home, the Czech National Trust and also the support of the Tatana Kucharova - Beauty Helps Foundation.
The total proceeds of the charity auction amounted to nearly 200,000 CZK.
Thank you for your support and see next time at our auction! 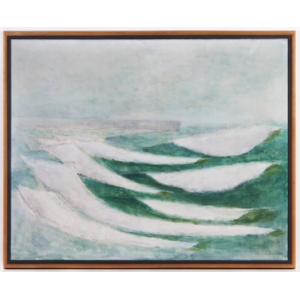