The grand opening of the monument of the painter František Kupka took place at the Maison de Camille Museum in rue Benoît Malon on 17 November 2017 at 7 PM in Puteaux, Paris, on the occasion of a commemoration of the 60th anniversary of the painter’s passing away. In June this year, the first unveiling of the monument of František Kupka took place in Opočno. Puteaux, today's modern Parisienne neighborhood, located on the left bank of the Seine, where František Kupka spent most of his life and where he died, signed a partnership agreement with Opočno in 2010.
The ceremony was attended by the mayors of both cities, Mrs. Joëlle Ceccaldi-Raynaud for the city of Puteaux, and Mrs. Šárka Škrabalová for the town of Opočno together with the donor of the unique Kupka's bust, Mr. Vladimír Lekeš.
The invitation was also accepted by professor Petr Drulak, the Ambassador of the Czech Republic in France, as well as Mr. Patrick Bongers, the grandson of the only Kupka‘s gallerist Louise Carré and the President of CPGA (Le Comité Professionnel des Galeries d'Art). Opening was also attended by leading figures in Parisienne cultural and social life.
The busts for the monument in Opočno and for the monument in Puteaux was given by Vladimír Lekeš, the owner of Adolf Loos Apartment and Gallery Prague, and George Waldes (the eldest son of the famous collector, the patron of art and the factoryman Jindřich Waldes). Jindřich Waldes was also the closest friend and the main supporter of František Kupka.
The busts for both memorials are the artwork of Jan B. K. Vlach (1904-1962), a highly valued sculptor who spent most of his life in France. He was a student of Jean Boucher at the Paris Academy. He created, among other things, the bust of president Edvard Beneš. According to the statement of George Waldes, František Kupka himself also worked on the statue. The bust, which Jindřich Waldes gained from Kupka, was originally placed on an honorary spot in Waldes's picture gallery on Americká Street in Prague, afterwards confiscated in 1939 by the Gestapo together with another Waldes property and later placed in Zemská Gallery, later the National Gallery in Prague. After 1996 the bust returned to the heirs of the original owners.
The author of the pedestals for this famous Kupka‘s bronze busts, both in Opočno and Puteaux, is the academic sculptor Marian Karel (1944).
It is more than symbolic that František Kupka's monumet is placed at his place of residence in Puteaux and at the place of his birth, in Opočno. 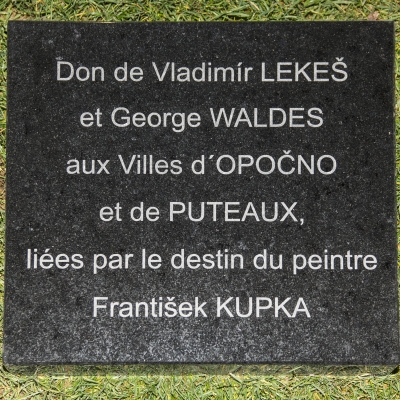