Press Release
JOSEF MŽYK: THE FOREIGNER
November 2016 - March 2017
Curator: Vladimir Lekes
JOSEF MŽYK (1944, Vienna)
Graduated from the Academy of Fine Arts in Prague and the École des Beaux-Arts in Paris. Had solo exhibitions in the Czech Republic, France, Germany, Japan, and participated in a number of group exhibitions in Europe, Asia and the USA.
Mžyk’s first solo exhibition took place in 1975 in the gallery of young artists in Mánes Gallery and met with official displeasure because it allegedly departed from the line of socialist art. In the1970's, exhibitions of nonconformist artists (A. Šimotová, J. John, S. Zippe, S. Kolíbal, V. Prachaticka, J. Svobodová) and artists of the younger generation were held in the Mžyk studio in Košíře and subsequently in Vinohrady (Confrontation). Also lectures by prominent art historians took place at the studio (J. Zemina, J. Šetlík and others). In the late eighties, Mžyk devoted himself to book and magazine illustrations, which were also subsequently published abroad. He was the author of large-scale works (painted with polyurethane paints on aluminum panels) in interiors and on the facades of public buildings, now constituting a significant chapter of the post-war "history" of art in architecture. Mžyk regularly worked with the leading architects of the day (Milunič, Línek, Pleskot, Dohnal).
Josef Mžyk is a respected representative of European figurative painting, drawing and graphics. He works in seemingly uncomplicated, geometrized cycles, with bright colors and flat surfaces, which explicitly hint at their own limits. It is a symbolic artificial world, one man's condensed idea of nature and the garden of Paradise. Deformation or incompleteness is applied here naturally, not as an imperfection, but rather as a deeper subjective expression.
The current exhibition serves as an entry into the author's work, which is a testimony to the better aspects of this world. 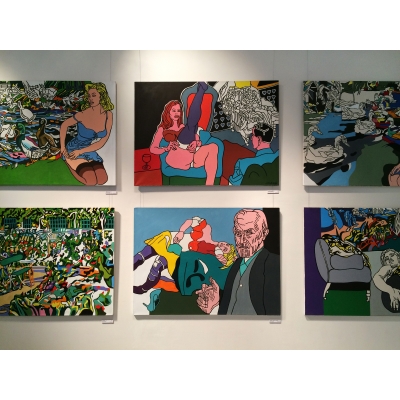