Oskar Kokoschka and the Ostrava Region

Oskar Kokoschka and the Ostrava Region

On 25 August 2022, the Adolf Loos Apartment and Gallery will open a small-scale exhibition of the work of Oskar Kokoschka, the famous painter, leading voice of European Expressionism, and one of the founders of international modern art, entitled Oskar Kokoschka and the Ostrava Region in its exhibition hall Expo 58 ART in Letenské sady.

Oskar Kokoschka's distinctive work is known all over the world. Misunderstood in his time yet now one of the most important artists of the 20th century, he arrived to interwar Czechoslovakia in 1934. The original trip turned into a four-year stay in Prague and Ostrava, which in many ways marked a significant turning point in his life. Here, he not only made acquaintance with several important Ostrava collectors and supporters of his work, but also his future wife. In 1938, together with his new Czech girlfriend Olga Palkovská, he left for England before the approaching war, where he married her in 1941.

The exhibition focuses thematically on the Ostrava region, which held a significant position in Czech artistic culture during the First Republic. Here, in 1937 Oskar Kokoschka painted two important oil vedutas: Moravská Ostrava I. (now lost) and Moravská Ostrava II. The latter painting, imported from Germany and sold privately in the Czech Republic in 2010 by the leading Czech auction house and gallery Adolf Loos Apartment and Gallery, Prague, will be part of the exhibition, as will an oil portrait of Karel Břetislav Palkovský from 1936, Kokoschka's later father-in-law. For the first time ever, the public will be able to see twenty-three unique works on paper that the painter dedicated to his family , often including personal dedications by Oskar Kokoschka, mostly to his wife Olda's mother, Mrs. Ludmila Palkovská.

The exhibition in the iconic Expo 58 ART building, now gaining a reputation one of the most important exhibition halls in Central and Eastern Europe thanks to its high-quality and attractive programme, is curated by the director of the Adolf Loos Apartment and Gallery, Vladimir Lekeš. The exhibition will be open from 25 August to 2 October 2022, daily except Mondays, in the Expo 58 ART exhibition hall (Letenské sady 1500/80, Prague 7) from 10 AM - 6 PM. 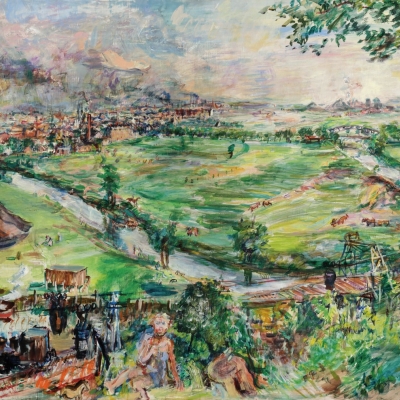