The joint exhibition of Frantisek Kupka and Alfons Mucha officially opened the renowned gallery and auction hall Adolf Loos Apartment and Gallery in the iconic Expo 58 building in Letenske sady. An incredible 18,000 paying visitors visited this unique exhibition in just three weeks. The value of the exhibited artworks exceeded the amount of two and a half billion crowns, making it the most visited and most expensive exhibition in the Czech Republic, organized by a private gallery. Visitors had a unique opportunity to see unique works of world importance of both masters from private collections. The quality of the exhibition aspires to the exhibition of the year in the Czech Republic.

The exhibition, as a free reminder of the only joint exhibition of Frantisek Kupka and Alfons Mucha, held in Paris in 1936, entitled F. Kupka - A. Mucha, was organized at the "Musée des Écoles Étrangéres Contemporaines" at the Jeu de Paume in the Tuileries Gardens. With this unique exhibition, the gallery has officially opened its exhibition activities in its new Expo 58 ART exhibition hall.

Expo 58 is considered one of the most beautiful buildings in the world of modern architecture of the second half of the 20th century, which has become a symbol of the international success of Czechoslovak art and architecture. The UNESCO World Heritage Site, which received the Grand Prix and another thirteen awards at the Expo 58 World Exhibition in Brussels, is thus reopened to the public.

The unique exhibition presented more than eighty important works by two Czech painters of world importance, Frantisek Kupka and Alfons Mucha, who were one of the most remarkable figures in Czech and world art of the first half of the 20th century. Most of the paintings were borrowed from private collections from the Czech Republic and abroad, some of the works visitors had the opportunity to see for the first time. Several of the paintings on display came from Frantisek Kupka's most famous pre-war collection, which was owned by a factory owner, art patron and Kupka's closest friend and supporter, Jindrich Waldes. Works from the famous collection of the important Parisian gallerist Louis Carré, who was the only one to represent Frantisek Kupka (from 1951 to 1957), were also presented. Furthermore, works originally from the collections of the painter's wife, Mrs. Eugenie Kupka, a close friend of A. P. Galien, Jiri Kolar and other important collectors, were exhibited. The only two sculptures created by Frantisek Kupka were exhibited together for the first time - bronze busts of his wife Eugenie.

You can see the exhibition in 3D now on our website: here 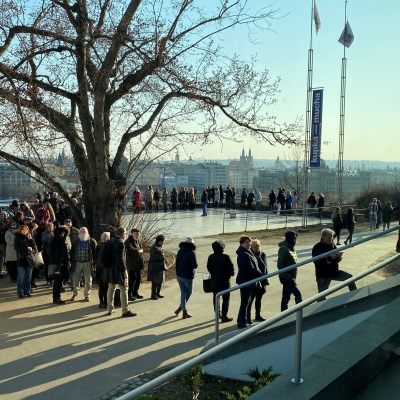